I am not a perfect person! 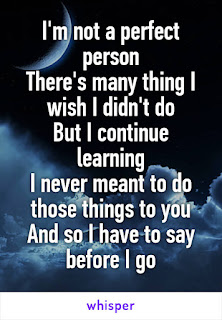 (Photo Credit: http://whisper.sh/whisper/053ef43232395050503936ec8310e14f2d38ce/Im-not-a-perfect-personTheres-many-thing-I-wish-I-didnt-doBut-I-co)
My intentions going forward are to write in this blog everyday, for better and most likely worse.

I live in Upstate NY and was born to Irish & Polish parents of the Catholic faith.

My Dad is !00 % Irish, worked as a correctional officer (retired) so it may not surprise you to hear he has been known to drink and had a short fuse at times.


My Mon is 100% Polish, she likes to play the ponies and  used to work for the Phone Company.

So I grew up in the Catholic Church but when my teenage years (17) really started taking off I was sure that my desires and actions would send me to hell. I liked to drink and was very interested in the prospects of premarital sex.  So instead of going to confession I decided to just deny God altogether.  I was also extremely liberal and humanistic I guess.

At 22 I met the woman who would become my wife, Michele,  I was sort of lost and lonely and although she had a 10 year old daughter and I wasn't sure about being a step parent, We got romantically involved and a few months later I was moving in.   Michele was a non-practicing Episcopalian but after a few years we decided to get married and have kids so we started going to Church.   The Episcopalian church was great, compared to the Catholic church I was used to.  The reverends were really nice guys and as it turned out gay lovers.  That was fine and dandy with me.  Like I said I was extremely liberal and thought people should have the right to love who they wanted, and that gays could serve in the church, why not.  I even went to classes to learn about the Episcopalian Church and the next thing I knew I was being annointed with oil and was a confirmed Episcopalian!

Michele and I got married in 1998 and our daughter Haley was born in July of 2000.  Things were good.  We got the news shortly after Michele was going to have twin boys! Michele was pregnant with them during 911 and a few months later Brennan and Holden Clark were prematurely born on 122101.   Holden was the bigger boy and got to come home shortly after. Brennan was smaller and had to stay in the hospital for a week or two and when he came home he had a heart monitor attached.


that's all the time I have for today. Pretty terrible, I bet, but I will continue everyday now. I have a lot to say and no time to say it.

Email ThisBlogThis!Share to TwitterShare to FacebookShare to Pinterest
Labels: Testimony