Purity 276: Encouragement for the Path of Christian Discipleship 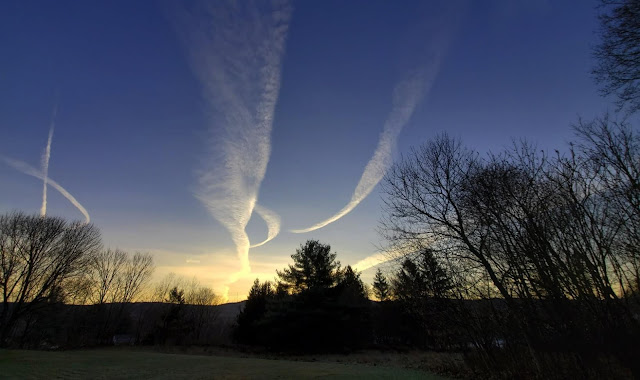 Today’s photo was taken by friend who rose early to catch this magnificent sunrise scene presumably in the Hillsdale area of Upstate NY.  It looks like God Himself was using the skies as a sketch pad as the heavens look as if they were touched by a heavenly presence.

I pray that everyone enjoyed the Thanksgiving holiday yesterday and will take the lessons learned from it to share their hope and love with others in the days to come.

This morning’s meditation verse was:

John 4:1 (NKJV)
1 Beloved, do not believe every spirit, but test the spirits, whether they are of God, because many false prophets have gone out into the world.

As it was in John’s day, so it is in ours. The danger of false teachings that could lead us astray is a real and present danger.  In our post-Christian society where diversity and tolerance are the catchphrases of compromise it is more important than ever to know what we believe and why we believe it.

Recent surveys done by Ligonier ministries (https://thestateoftheology.com/), reveal that not only do those outside the church hold beliefs that contradict biblical truth but a large percentage of respondents who consider themselves to be Christians also hold beliefs or opinions that oppose the basic beliefs of traditional Christianity.

Opinions of why this is can vary but I would theorize that the reason for this digression away from the Truth of God’s word can be summarized by the simple explanation of ignorance: the vast majority of those who would consider themselves Christians don’t know truth.

If we ever wonder why “the church” is just as troubled as the rest of the world, in light of these survey results we shouldn’t wonder for long.  If the truth sets us free, we need to know the truth.

The good news is there are plenty of Christian resources available online to help to teach the rationale behind what we believe and why we believe it.

After living a life all over the spiritual landscape from nominal liturgical Christianity to atheism to Buddhism to Biblical Christianity, when I finally heard the gospel of the kingdom of God and the forgiveness of sin by grace and faith in Jesus Christ, I felt determined to make sure I wasn’t being led astray. As a skeptic, I pursued the truth of Christianity by spending hours and hours reading the Bible, listening to Christian messages, reading Christian non-fiction, and obtaining a Bachelor’s degree in Biblical Studies, and now completing a Master’s program in Christian Counseling.

However, my seeking God wasn’t just an intellectual exercise. I also sought the Lord in prayer, worship and service.  Through my ten-year journey of investigating the truth, applying it to my life, and seeking the Lord’s presence, I can say that the Lord has revealed Himself to me time and time again. I didn’t just learn about God; I encountered His manifest presence.   He is Emanuel. He is with us.

So, take time to seek Him and His truth. There’s a lot to learn and I don’t think our seeking Him and His ways for our lives was ever meant to end.

Today we continue to share from Anderson & Baumchen’s Finding Hope Again, where the conclude Chapter 3 by providing the proof that their methods of dealing with depression have positive results.

As always, I share this information for educational purposes and encourage all to purchase Anderson’s books for your own private study and to support his work:

Proof That It Works

At a "Living Free in Christ" conference conducted by the Freedom in Christ Ministry, Judy King, a Christ-centered therapist, handed out a survey to those who desired a personal counseling session after the conference. The conference covers the material in Neil's first two books, Victory over the Darkness, and The Bondage Breaker, and concludes by taking the group through the "Steps." The intention is to give people every opportunity to resolve their personal and spiritual conflicts. They learn who they are in Christ, what it means to be a child of God, how to relate to one another in love and forgiveness, how to walk by faith; and finally they are taught their position, authority and protection in Christ.

In our experience, 85 percent of those who come to the conference find resolution to their conflicts as a result of going through the "Steps" on their own. Judy gave these questionnaires to those who couldn't get through the process on their own because of a lack of time, or because their problems were too intense to deal with them in a room full of people.

After the conference, they had one counseling session with a layperson using the "Steps," and usually one or more prayer partners were also present. Keep in mind that it didn't matter what their presenting problem was. Some of them could have been depressed, but others may not have been.

Three months later these same people were given the questionnaire again. The group as a whole showed:

Most of the lay counselors had very little training other than what the conference provided, which makes the results that much more remarkable. We believe that Jesus is the wonderful Counselor, and that only He can grant "repentance leading to the knowledge of the truth" (2 Tim. 2:25). Medication, therapy, diet and exercise can be helpful, but only God can remove the guilt and heal the brokenhearted. These lay-Christian encouragers only facilitated a process that is made possible by the presence of Christ.

It is important to keep in mind that the "Steps" don't set you free. Christ sets you free, through your response to Him in repentance and faith.

This process of helping people to repent and affirm the truth is certainly not new. But it is often overlooked in helping people who are struggling, which is probably why we have an epidemic of the blues upon us.

You cannot experience the fruit of the Spirit if you are believing a lie, dabbling in the occult, holding on to your bitterness, sinking in pride, living in rebellion or sinning. Depression is riddled with contaminated thinking and erroneous beliefs built upon contradictions and lies. "The Lord detests lying lips, but he delights in men who are truthful" (Proverbs 12:22, NIV). Those issues must be resolved in order to experience the peace of God that guards your heart and your mind.

To illustrate this, let us close with the following testimony a friend of our ministry shared in a newsletter:

A year ago, Simon fell captive to severe depression. The doctors did what they could, but without much effect. From time to time I had the opportunity to speak with him about the love of Christ, but he wasn't very responsive. Last fall we began to meet more frequently, but I always came away frustrated. Nothing seemed to change, and our conversations ran in circles around the same morbid themes. However, God used these times to show me that I was relying too much on my own efforts and not nearly enough on His power to effect change. In desperation, I was driven to seek God in a more profound way through prayer. God worked on Simon's distorted view of truth, while He worked to cut through the pride that was in my own heart. Just before Christmas, Simon made a commitment to follow Christ as Lord and Savior. His depression, however, was only mildly improved.

Simon had a history of occult and New Age involvement, and it became evident that there was demonic oppression in his life. For this reason, I lent him The Bondage Breaker. At the end of the book the believer is invited to walk through the seven "Steps to Freedom in Christ." I told Simon that I would help him work through these steps when I returned from a trip. During our time away, I called Simon to see how he was doing. The voice that spoke to me was changed. Simon had not waited for me to take him through the seven steps. He had done it himself the previous evening. The old thoughts which had constantly filled his mind were gone. I heard him laughing for the first time. Praise the Lord.

Email ThisBlogThis!Share to TwitterShare to FacebookShare to Pinterest
Labels: Depression