Purity 346: Encouragement for the Path of Christian Discipleship 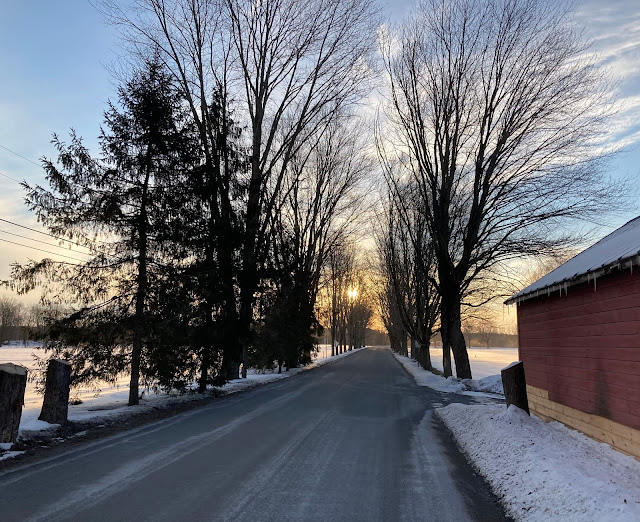 Today’s photo comes from yours truly as I caught this shot last weekend on Gibbons Rd not far from my home in Stuyvesant NY.   This section of road has tempted me to capture its beauty before, but I always seemed to be in a hurry to another destination. On this occasion, I happened to be stuck behind someone who seemed to be learning the finer points of driving a tractor trailer and instead of driving around them I decided to stop and grab this photo and to put some distance between us.

This photo doesn’t really do the road justice. I love the way the trees line both sides of the road like some sort of natural honor guard that invites you to proceed underneath their upraised branches.

When I took this photo, I should have waited just a few minutes more for the sun to move a little more to the right, but I think it’s all right. Sometimes the beauty lies in the slight imperfections that make what we see unique.

Plus I like the anticipation in this photo, that makes you want to drive into it and see that sun, up close and personal.  As we drive into the weekend, I pray that you find peace, rest, and rejuvenation.

Last night, I learned that an acquaintance just a few years older than me had passed away.  As odd as this may sound in our modern area, I guess you could say that he was a guy I knew “from the neighborhood”. Because of our age differences we weren’t classmates, but I knew him from our community’s youth program’s playground system. I didn’t know him too well personally, but he had a great sense of humor, a zeal for life, was well known, and dearly loved by many in our community.  His death reminded me again that none of us can count on a long life and it convicted me to continue sharing the message of the assurance of eternal life that comes through faith in Jesus Christ alone.

The Lord blessed us last night at the discipleship class as the class size doubled and there were new faces that had never seen the inside of our church.  I did my best to deliver a message of hope and freedom in Christ and I pray that it was received.

I reminded everyone of that we had just begun the season of lent and that the prayer for lent is to “repent and believe the gospel”. Repenting is turning from the world’s way and turning towards God way.

The second encouragement is really what I taught on though, to believe the gospel.  The good news of Christ coming to earth, dying for our sins, being resurrected is important to know but we really have to believe the gospel.  Some may say “Oh yeah, I believe that” but I want to stress that we get no benefit from just agreeing intellectually that you think that is true or that its historically accurate.  The eternal life that Christ provides comes from believing the gospel personally, for yourself, by placing your faith in Jesus.

That’s what I’m teaching because that’s what I know. So I encourage all who see or hear this message to repent and believe the gospel for what it has done to you and for you.

This morning’s meditations verses are:

Psalm 117:1-2 (NLT2)
1 Praise the LORD, all you nations. Praise him, all you people of the earth.
2 For he loves us with unfailing love; the LORD’s faithfulness endures forever. Praise the LORD!

Today we share an entire psalm, as psalm 117 is the shortest psalm in the Bible. It also just happens to be at about the halfway point in the Bible.  Psalm 117 may be short but it sure is sweet and it sure is true.

We are to praise the Lord for His creation, our lives, and what He has provided us.  If we know the truth of the gospel and have made Christ our Lord and Savior, we have been called out of eternity to know the truth that gives us meaning, purpose, and life forever with Him.

The second verse of Psalm 117 proclaims the Lord’s love and faithfulness and assures us that His love is unfailing, and His faithfulness endures forever.  Knowing these things about God and knowing that He has personally called us into His family forever gives us cause to praise the Lord forevermore.

Rejoice! Praise Him! Live in the peace of His presence and share what you know with others.  The world needs hope, so give it.

I invite all to mt4chritst.org where I always share insights from prominent Christian counselors to assist my brothers and sisters in Christ with their walk.

Today we will share from Dr. June Hunt’s Biblical Counseling Keys on “Anger: Facing the Fire Within”

As always, I share this information for educational purposes and encourage all to purchase Dr. Hunt’s books for your own private study and to support her work:

The day begins like any other day, but ends like no other, for on this day, he gives full vent to his anger... and, as a result, finds himself running for his life.

He is part of a mistreated minority—grievously persecuted—not for doing something wrong, but for being perceived as a threat. Raised with privilege in the palace of a "king," he had been spared the heartless treatment inflicted on his kinsmen. But watching the injustice day after day and year after year finally becomes too much for him to bear.

When he sees one of his own people suffering an inhumane beating at the hands of an Egyptian, Moses is filled with rage. He snaps. In an instant, he kills the Egyptian and hides the body in the sand. But his angry, impetuous act is not committed in secret. When news of the murder reaches Pharaoh, Moses fears for his life and flees. (See Exodus chapter 2.)

When you look at the life of Moses, you can see both the power and the problems inherent in anger. Has anger ever clouded your judgment to the point that you reacted rashly... and lived to regret it? Ultimately, you have the choice to act wisely or to react foolishly. In his lifetime, Moses did both. Like him, you too can face the fiery anger within and learn to keep it under control. In doing so, you will demonstrate wisdom because...

"A fool gives full vent to his anger, but a wise man keeps himself under control." (Proverbs 29:11)

Understandably, Moses felt anger over the unjust treatment of his Hebrew brothers, but what he did with that anger is what caused all the trouble. Moses allowed his anger to overpower him. Acting on impulse, he committed a crime—he committed murder.

Although he was right about the injustice, he was wrong in his reaction. His hot-blooded volatility revealed how unprepared he was for the task God had planned for him. Consequently, God kept Moses on the back side of a desert for the next 40 years so that he would realize that rescuing his own people in his own way would ultimately fail.

Moses needed to learn this vital lesson well to become the leader through whom God would accomplish His own will in His own supernatural way. In truth, Moses had tried to earn the Israelites' respect by coming to their rescue. Instead, his murderous rage earned only their disrespect....

"Moses thought that his own people would realize that God was using him to rescue them, but they did not." (Acts 7:25)

A. What Is the Meaning of Anger?

What had begun as a smoldering ember in the heart of Moses quickly burst into deadly flames. Perhaps no one noticed the angry sparks flying from his eyes, but his spirit was consumed with the heat of anger....

"Glancing this way and that and seeing no one, he killed the Egyptian and hid him in the sand." (Exodus 2:12)

Who hasn't lit a candle and become entranced by the flickering flame? As it dances on the wick, it is a delight to see, but dangerous to touch. No one dares put a finger into even the tiniest of blazes.

Anger is much like the flame of a candle—it's associated with "heat" of varying degrees. Temperatures are determined by the hues of the flame, but no matter the blues, yellows, oranges, and reds, we all know that it's hot, and if we hold on to it, we will get burned!

And so it is with anger: The higher the degree of heat, the more people get hurt—including you....

"Can a man scoop fire into his lap without his clothes being burned?" (Proverbs 6:27)

In the New Testament, the Greek word orge originally meant any "natural impulse or desire," but later came to signify "anger as the strongest of all passions." It is often translated as "wrath" because of its powerful, lasting nature. ...

"For those who are self-seeking and who reject the truth and follow evil, there will be wrath and anger." (Romans 2:8)

Join our “Victory over the Darkness” or “The Bondage Breaker” series of Discipleship Classes via the mt4christ247 podcast!

at https://mt4christ247.podbean.com, You can also find it on Apple podcasts (https://podcasts.apple.com/us/podcast/the-mt4christ247s-podcast/id1551615154). The mt4christ247 podcast is also available on Google Podcasts, Amazon Podcasts, Spotify, iHeartradio, and Audible.com.