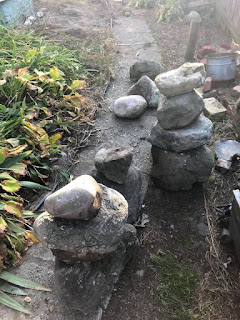 Purity 227 09/30/2020
Good morning,
Today’s photo was posted by a friend who was giving away what he called “fairy healing stones” to anyone who wanted to take them away. No explanation was given. So I can’t testify to whether these rocks have healing properties or if it it just was just a clever, albeit possibly dishonest, way to get rid of some unwanted rocks from their garden. No word if there were any takers.
I share it because although I don’t follow politics the posts I see on FB indicate that last nights presidential debate was an embarrassment for both sides, leaving our country with the dubious duty to decide which one of these “rock heads” are for real.
For me I’ve decided to stick to party lines - not just in November but everyday - and vote Jesus!
Because the governments of this earth’s authority is temporary and frankly I don’t trust either side’s ability to fix the problems of mankind , I will make a choice, vote, accept whatever result is determined, and then go about my life working to support my family and taking every opportunity to share the hope of Christ .
I’ve surrendered my life to following the word of God and the leadings of the Holy Spirit and that won’t change no matter who holds the governmental seat of power.
The last temptation of Christ in the desert was to be given the power of authority of all the kingdoms of this earth.
In response, Jesus said: “Away with you Satan! For it is written, “You shall worship the Lord your God, and Him only you shall serve.”
If earthly authority didn’t speak to Jesus, it doesn’t appeal to me.
I’m not concerned about a presidency. I’m concerned with the kingdom of God.
I’m not concerned about the next four years or even the “term” of my lifetime. I’m concerned with being “elected” into a life that never ends to serve a God that rules above and beyond all we know.
God bless you all!
Posted by MT 4 Christ at 6:48 AM No comments: